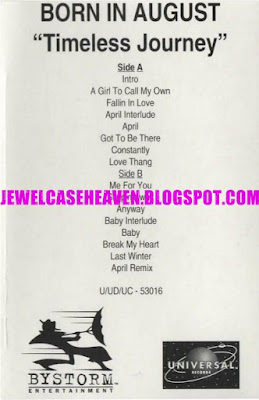 Further unreleased music from Universal Records and the brainchild of Mark Pitts, a former manager for early Bad Boy Entertainment acts. Because of his rap background, a lot of people were surprised to see him signing an R&B group - specifically one with little or no rap - but with production by Darryl "Day" Pearson (formally a member of DeVante's Swing Mob collective in the 90s), Born In August's style of emotion-filled balladeering was compared to that of Boyz-II-Men. Sadly after only one single "April" in 1996, the group disappeared completely, most likely due to lack of promotion. Showcases and TV appearances were planned for them but they were (at least at the time of a Billboard article dated 07/13/1996) without a booking agency. Unfortunately for them there was no lack of male vocal groups in the mid 90s with groups such as Intrigue and Soul For Real also recording under Universal Records at the same time. For me though, they definitely had something that was missing in a market which had begun to become overly saturated in rap and hip hop. Many thanks again to Stuaaart for sending it.


Further note: As far as we know it only ever existed on promo cassette and was never pressed to CD. The erroneous listing on Discogs we suspect is a bootleg, the "cover art" being traced all the way back to a Vibe Magazine article from 1996. The item above may be the only legitimate hard copy we've ever seen which is why I have posted it here.
Posted by Jewelz Smooth at 3:03 PM 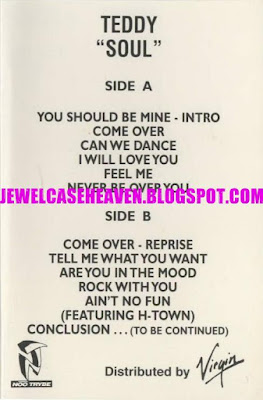 Another label that couldn't get their shit together in the 90s was Noo Trybe Records. Starting out in 1994, they operated as the urban subdivision of Virgin/EMI Records and became the distributor for Houston, TX-based hip hop label Rap-A-Lot Records up until its demise in the late 90s. This was the most successful venture that they had with acts such as Luniz, AZ and others making the Billboard top 200. Sadly the R&B wing of the label was not so successful with non-existent albums from One Shade (1995), girl trio MQ3 (1997) and Shiro (1998). The above guy Teddy Martin was initially discovered as a backup vocalist for Jody Watley before he was signed to the label in 1995. The label had a lot of enthusiasm for him especially, so much so that they had him performing concerts from the get go but after two singles and an appearance on the Original Gangstas Soundtrack, he disappeared completely. Truthfully I don't think the label knew who to market him to; his first single was aimed at younger audiences but the follow up more towards adults... his shelved album "Soul" was given mainly positive reviews in the press and featured production from mainly low-key but nonetheless great producers, the most widely known of all of them being Houston, TX producer Bishop "Stick" Burrell (formally of the early 90s New Jack Swing group Quess.) After widely being seen on bootleg vinyl, my regular contributor Stuaaart finally managed to score the original promo tape a few months back. As always a big thank you to him for keeping this blog going.

Posted by Jewelz Smooth at 2:22 PM 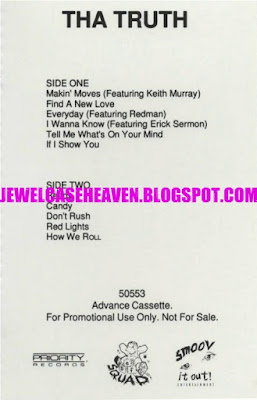 Along with Nuttin' Nyce, MoKenStef, Y?N-Vee and many more, Tha Truth was yet another girl group from the mid 90s that came and went without leaving a trace. The brainchild of Erick Sermon and DJ T-Smoov, they were best remembered for their single "Red Lights" which sampled "Bustin' Out On Funk" by Rick James. They released one album "Making Moves...Everyday" which featured appearances from Keith Murray, Redman and Sermon. A handful of songs were also written by Faith Evans and Missy Elliott early in their careers so it really was a very diverse project featuring the best of hip hop and soulful R&B rolled into one. The unreleased track "Tell Me What's On Your Mind" was later replaced with "What You Do 2 Me" (featuring Kenny Greene) prior to release and as far as we know only available on this very rare promo tape. Despite using the exact same production from Sermon, both songs sound noticeably different. Thanks again to Stuaaart for the contribution!

Posted by Jewelz Smooth at 4:51 PM 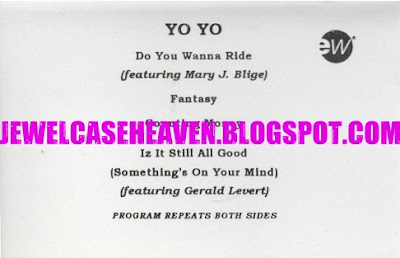 East Coast-meets-West Coast from South Central's Yo Yo and taken from her doomed fifth release "Ebony" in 1998. After four successful releases, the project was shelved due to contractual issues; most, if not all, of the guest appearances did not have proper clearance to work with an artist on East West Records and thus began the first year of many disasters for this hopeless label which would've otherwise put out quality content. Blige was replaced with Kelly Price on the promotional single release and up until now, it had not been heard before. As far as I am aware, it only exists here and cannot be found on any copies of her full album. Many thanks again to Stuaaart for this amazing score!

Posted by Jewelz Smooth at 1:37 PM 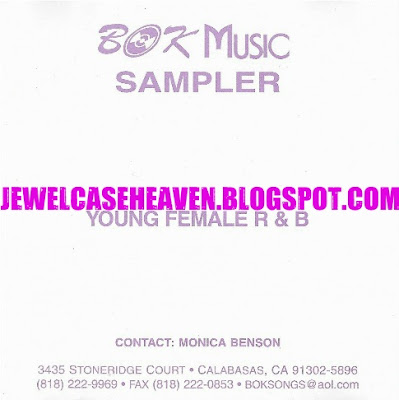 Further submissions from a wide variety of songwriters that may have been used in TV shows and movies back in the day. At least three (written by Joleen Belle) were picked up for major label artists ("Good & Plenty" was recorded by R&B group Divine for their 1999 album "Fairy Tales"; "Down & Dirty" was given to teenage singer J'Son for "The 8th Man" soundtrack and "Cool With You" was remade into an acoustic pop number for Jennifer Love Hewitt. Over in Denmark, the later two songs were also given to Danish R&B singer Peaches Lavon, formally of funk duo Peaches & Bobo. With the exception of "Down & Dirty" which pretty much sounds the same as J'Son's version (but with a 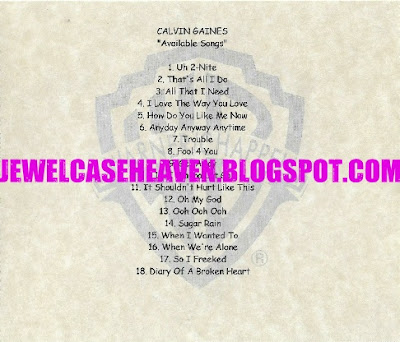 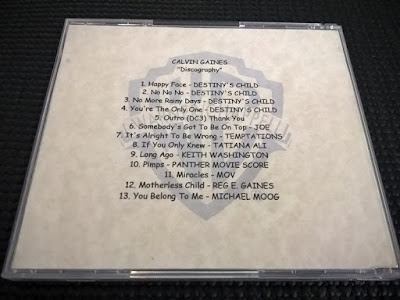 Further unreleased music from Calvin Gaines, a producer and songwriter from New Jersey who has been active since the late 80s. He is another one who remained under the radar despite working with some of the biggest names in pop from Destiny's Child to Lady GaGa. His forte is primarily R&B but he also writes pop, country and hip hop songs. The above is a collection of his work both unreleased and released that I came across. The first disc contains songs that he submitted to labels but only one (''Suga Rain'') was ever picked up as far as I can tell. If you ever listened to mid-2000s Motown group Her Sanity you will recognize it from their album straight away but on this collection of demos it is