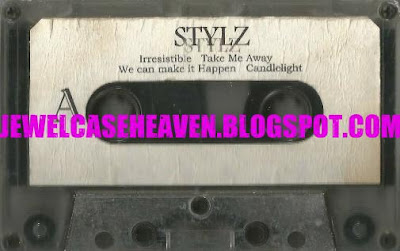 Further obscure R&B from an unknown male group, possibly a demonstration although I am not 100% certain. I know nothing about them but I believe they might be an early incarnation of this group here - produced by singer-songwriter Mikki Bleu - from the Houston TX area. There's no date of recording/issuance but guessing mid 90s judging by the smooth R&B sound. They don't remind me of anybody in particular but a few tracks ("Candlelight", "Pink") are somewhat reminiscent of the romantic side of some 90s groups such as Tony Toni Tone and Mint Condition. 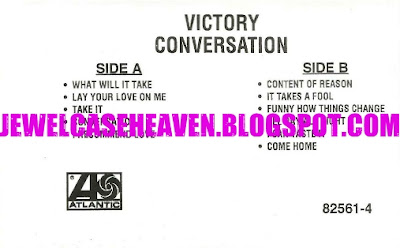 Seemingly unreleased project from an unknown male group and found on promo cassette only. I have searched high and low for any information about them but absolutely nothing comes up - and I mean nothing. They don't appear to have any singles and this tape was mistakenly put in the discography of a shitty Italodance act of the same name. I have searched song titles and once again, nothing comes up - and I mean nothing. There is no date of recording/issuance but guessing 1992/1993 judging by the sound which is mostly quiet storm R&B/New Jack Swing in the same vein as early Jodeci with tight Shai-type vocal harmonies. Definitely better than the two groups that Atlantic did release Levert and All-4-One, why it seemingly did not see light light of day will forever remain a mystery to me. 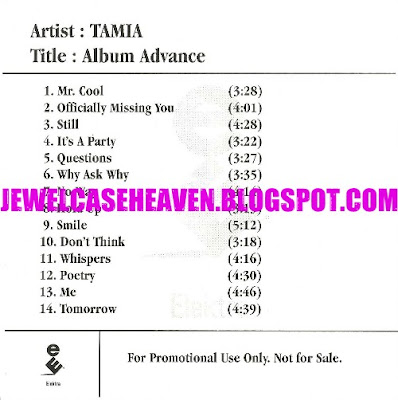 Another stalled project from the abysmal Elektra Records, well known for its delays and cancellations of many quality R&B projects in the late 90s-early-2000s era, but for once, from what I can tell, this one was beyond their control. It was Tamia's diagnosis with a life-changing illness that pushed this one back by a year though due to the label's wish to include productions by Poke and Tone the version that they released in the end was drastically different. Originally titled "Still", the album was to have the above track-listing but upon its release in 2004 five tracks had been pulled in favor of a cover song and lackluster collaborations with rappers. LQ Internet leaks of "Hold Up" and "Don't Think" have been in 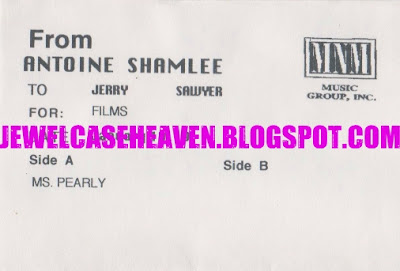 A further obscure demo by a male artist or group and intended to be used in an undisclosed movie or soundtrack. It's a typical romantic male slow jam with soft, melodic vocals and rich, smooth harmonies.  Not date of recording but says "January 10, 19" on the J-Card so I am assuming mid to late 90s at the least.

Again thanks to my co-contributor Stuaaart over @ beats4dastrets for the contribution. 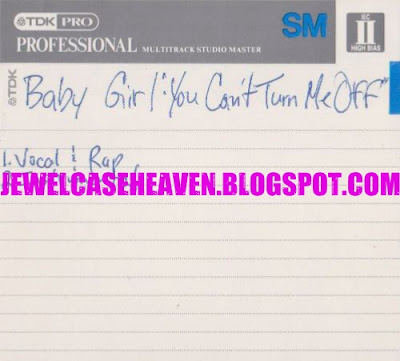 Acquired from my co-contributor Stuaaart over @ beats4dastreets, a further demo cassette from a mystery female artist and recorded onto a multi-track analog master, probably in the early 90s. It is a somewhat DIY rendition of 70s soul group High Inergy's song of the same name and combines elements of synth, soul and rap. I don't know much about them but their original rendition reached number two on the Billboard Black Singles Chart in 1978. 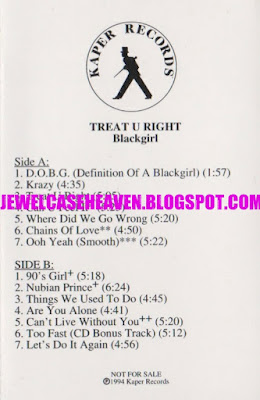 Advance pressing of BlackGirl's one and only album featuring tracks (1, 11) that did not make the final cut. Along with NKRU, they were another group group signed to RCA's urban label Kaper Records in the early to mid 90s. While the more rap-orientated NKRU never went beyond one single, this group seemed to fair better with four singles between 1993-1994, including two that charted on the Hot 100. They released one album Treat U Right that featured production from a pre-Redzone Christopher "Tricky" Stewart, Derek Allen (mostly known for his work with Bobby Brown) and Dallas Austin's then-associate Arnold Hennings. Signed to the same label as the immensely popular SWV, they were lucky that they didn't get too much shade but sadly their career never progressed any further despite being nominated for two Soul Train awards in 1995.

NOTE: Despite being listed on the front, Too Fast does not appear anywhere on the cassette
Posted by Jewelz Smooth at 1:19 PM 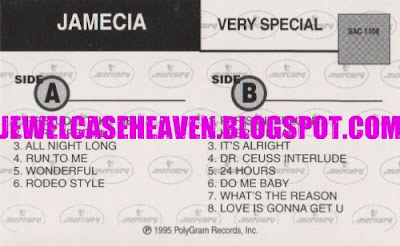 More unreleased R&B from Mercury Records, this time the daughter of renowned gospel artist Ann Nesby and mostly known for her only single "Rodeo Style" in '94. Sadly I don't know much about her but it appears she got her start singing soprano with her mother in the gospel super group Sounds Of Blackness in 1991. This apparently lead to her being discovered by Mercury Records where she went on to release two singles as a solo artist. Neither got much of a wide release - promo only from what I can tell - but "Rodeo Style" appeared on the soundtrack to the 1994 movie Jason's Lyric. She recorded a whole album which for reasons unknown never saw the light of day but some tracks were later leaked to bootleg vinyl with the title "Jamecia - The Album" around '96. I don't know much about the production side but a least a few tracks were produced by Chad "Ceuss" Elliott, who was formally a member of Devante's Swing Mob team in the 90s.

OG copy personally ripped by my pal Stuaaart over @ beats4dastreets
Posted by Jewelz Smooth at 4:56 PM 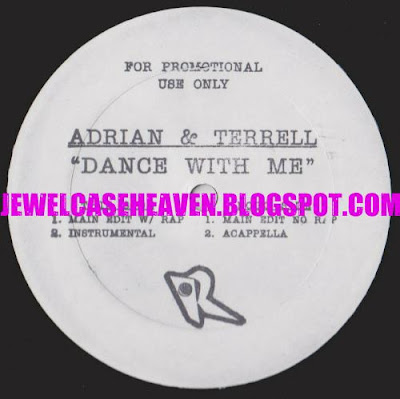 More obscure R&B on vinyl that I know little about but might be based out of Wilmington, DE from the only other release found under this label on Discogs. Quite possibly a test press but don't know for exact certain. No date of release but guessing the late 90s from the sample-rich hip hop sound.