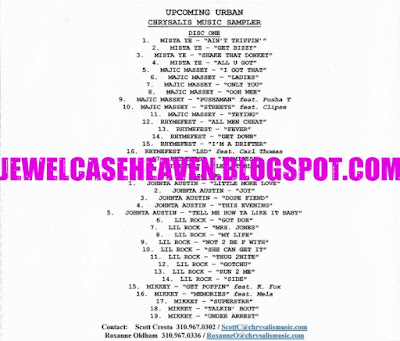 More unreleased R&B/Hip Hop music from Chrysalis Music Group USA, a publishing company with a wide variety of artists on many major labels from Universal, Virgin and Kedar Massenburg's Kedar Entertainment Group. No date of issuance but guessing the mid-2000s going by the few singles that were released by Johnta Austin, Majic Massey and others. Chi-Town's Massey, a former member of the group Entourage, managed to hold onto his recording contract with Universal's Street Records Corporation for a decade but for some reason he never got an album out of it. He released about a dozen songs between 2005-2010 but the closest he got to an album was a couple of
features on Jamaican dancehall artist Cham's "Ghetto Story." More's the pity because he really sounded like a hybrid of R. Kelly and Al Green; from the classic soul vibe of tracks such as "Only You" and "Trying" to the dirty blues flava of "Pushaman", he really deserved the hype. Another feature here is Johnta Austin who also managed to hold on for a decade without any sign of his album "Ocean Drive." This may have been in part due to So So Def's jumping from pillar to post but he did manage to carve out a pretty decent career for himself writing for other artists. Although not as innovative as Massey Austin could've been at the forefront of a 'babymaking songs' revival with great songs such as "Tell Me How You Like It Baby" and "This Evening." Certainly Jermaine Dupri certainly had a missed opportunity with him as he did quite a few artists in the mid-2000s era. Also deserving an honorable mention are Little Rock, AK hip hop duo Lil Rock Playaz who were mostly known for their take on Billy Paul's 1972 song "Me & Mrs Jones." They were signed to Kedar Massenburg's Kedar Entertainment Group but despite being hailed as the best group to have ever come out of the South and later being headhunted by Jay-Z, they sunk without a trace. They did most of their work with Allen "Allstar" Gordon, including a feature with Joe "Thug 2Nite" which as far as I know was not released. The liner notes state 9 tracks by the duo but 3 of them are not them at all but by unknown R&B artists. They don't sound like anybody familiar to me but at least two of them were produced by Gordon as per the shout out in the intros. They are possibly artists affiliated with Massenburg's label but not entirely certain. One of the songs "Gotchu" was later given to The Bomb Digz, a trio on Gordon's Starcyde Entertainment label, to record in 2017. Again a lot of missed opportunities here but at least I get to hear them.

Mista Ye and Mikkey are two then unisgned rap artists possibly affilated with Kedar Massenburg. Rymefest was a rapper who was signed to J Records in the mid-2000s and mostly known for his work with Mark Ronson. Three tracks here appeared on his album "Blue Colar" but "I'm A Drifter", "LSD", "Promises" and "Let It Blow" appear to be unused.


NOT FOR SALE THANKS!
Posted by Jewelz Smooth at 1:03 PM