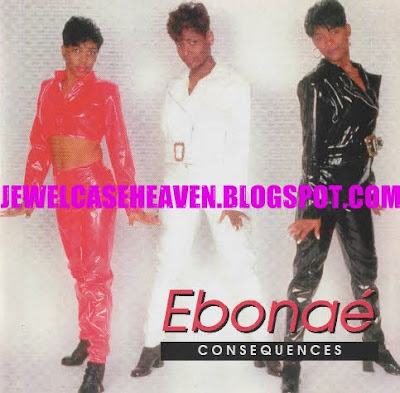 A collector's "Holy Grail" and found by Napo while digging the crates in and around Virginia Beach. It turns out that they were from his area (Chesapeake) and this was actually one of a few copies that he found. Sadly along with Deon and Ultimate Pleazure, mp3s of this gem have long been in circulation for years among certain types of 'collectors' but to find an OG copy is probably a once-in-a-lifetime occurrence let alone a whole stack of them. Produced by Clayton Savage, a recording artist from Manassas, VA, the style is a mixture of R&B, soul and rap with a NKRU-meets-Pure Soul sort of vibe. There are no tracks that I didn't care for but for the 'booty' style outro which includes an interpolation of "Keep It Real" by Cheryl Lynn. Once again, a BIG THANK YOU to Napo and as always to Stuaaart for keeping this section going. 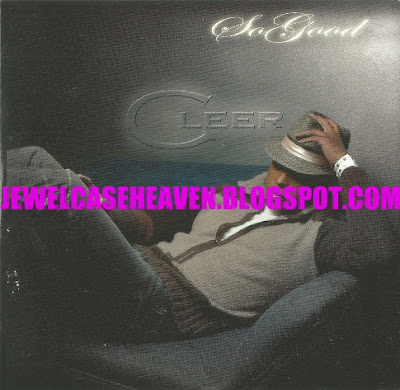 First featured in my now-defunct So Cal Crate Digging section, Cleer was a local artist from my area whose work I found collecting dust in my local thrift store back in '15. Originally hailing from Montgomery, Alabama, he somehow ended up in Palm Springs and being literally a few hours away, I found many of his CDs in the 99c crates including some demos he recorded back in the early 2000s (under his full name of Clearthur Lee) and stuff from a decade later released under a new moniker of "Cleer."While his early work was very much inspired by Luther Vandross, Gerald Levert and other soul and R&B greats of their day, his later work was much more contemporary and featured production from Marc Kinchen (SWV, Beyonce et al.) He released three singles to CDBaby between 2007-2009 but his album "On A Cleer Day" for unknown reasons was not released. The above single was also not released although it did serve as a b-side to a later single "Perfect Man." Also featured are two tracks (albeit in excerpt form only) from his unreleased album. Along with 3'Til 3, definitely one of my better finds at the thrift store. 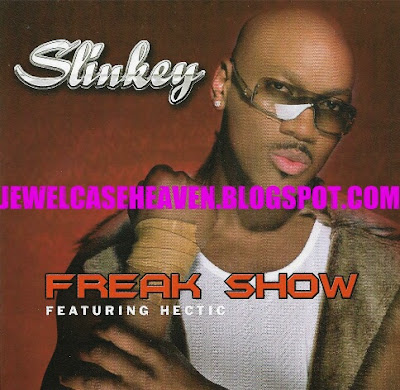 Further music from Las Vegas-based R&B singer Slinkey (real name: Manuel Alfonso Blake) who in 2004 was sentenced to death for a double homicide. I posted his "Freak Show" vinyl back in October of last year but here is the single featuring previously unheard snippets from his album that was never released, most likely owing to his court trial and the final sentencing for the crime he committed in March, 2003. While the quasi-rap style of "Freak Show" may have gotten him mistaken as a rapper by the press, the rest of his stuff (including an earlier release from 2000) is most definitely R&B. With the exception of a few tracks, most of it (notably "Pop Da Colla" (not featured), "Dollas" (not featured), "Diggin' The Day" and "Hot 2 Def") is pretty gangsta, perhaps another reason why he got that label. Regardless, along with Tika (posted here), he is definitely one of the more better indie R&B artists to come out of Sin City in the early 2000s.

Posted by Jewelz Smooth at 7:35 PM 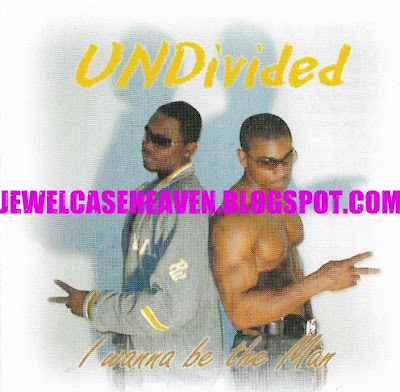 Staying in Maryland, a further obscure early 2000s group or duo found while digging through the crates in and around the musical mecca that is Virginia Beach.  Also going by UND as per the booklet, there is nothing under either name to be found anywhere online despite the CD itself being entered into the Gracenote database. It was also on Amazon Marketplace where I was lucky enough to find the last copy left. Comparable to Xtreme and a few other indie groups I've posted here, it is not as good as last year's gem Unda Presha but it is somewhat contemporary sounding for its day with a mainly upbeat production, and to find a new male group or duo is always a treat for us. Many thanks again to Napo for finding it and as always to Stuaaart for his continued contributions. 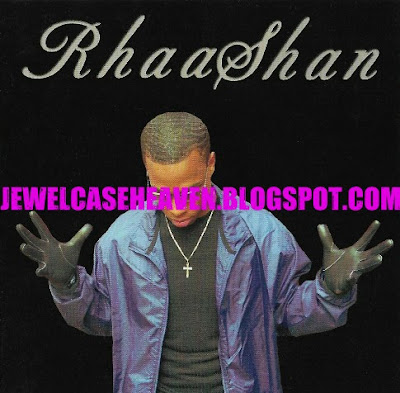 Further early 2000s praise from Langley Park, Maryland with RhaaShan J. Johnson of Greater Champion Ministries. Again, I am not a great fan of gospel but as with Tani, Bi-Faith and many others I posted here, this album stood out from the rest as the sound is more along the lines of early 2000s contemporary R&B with a little hip hop thrown in for good measure. I dare say I enjoyed most of it with only 1 reggaeton-type track "Hail Him Up" (the only one of its kind on the album) that I did not care for as much. There's no date of release but guessing 2002-2003 at the very least. 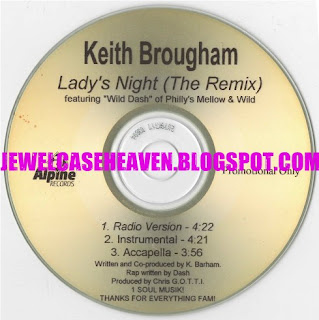 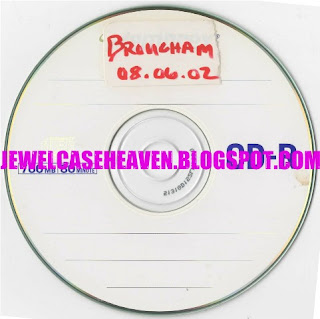 Another rare and surprising find from Stuaaart's Virginia Beach crate hunter Napo, a California Bay-Area (East Oakland) artist Keith Brougham. The single "Lady's Night" is a remix; whether an original version exists I don't know but the version on the snippet sampler sounds identical to it. The track is a chilled, mid-tempo groove with lazy but smooth vocals. There's no date of recording but from 2002 as per the snippet sampler. The sampler, running at just under 15 minutes, is on one continuous track and includes excerpts of various songs with commentary from the artist himself throughout. Seeming pretty local to the Bay-Area, I don't know how his single and excerpts from his proposed album "3774" ended up in Napo's home town but as always we are thankful that he found it. 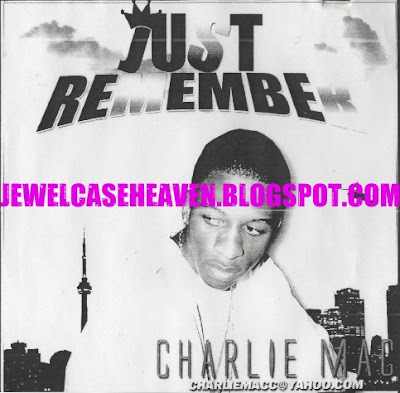 More obscure finds from our Virginia Beach source, starting with an early to mid 2000s male artist dubbed "VA's Idol", Charlie Mac or "C-Mac" for short. Obviously very local to the Virginia Beach area (despite the image of Toronto Canada in the background), there's no information about him anywhere and the disc itself is basically just a silver Fujifilm CDr. I don't know if this was his actual finished album or mixtape, perhaps given out to people on the street, but more songs can be heard during track 9. The sound is somewhat similar to this artist here and others a more underground interpretation of Usher Raymond. Track 7 sounds like a Neptunes instrumental but don't know for exact certain.

Many thanks again to Napoleon and of course to Stuaaart for sending.

All titles are approximate. 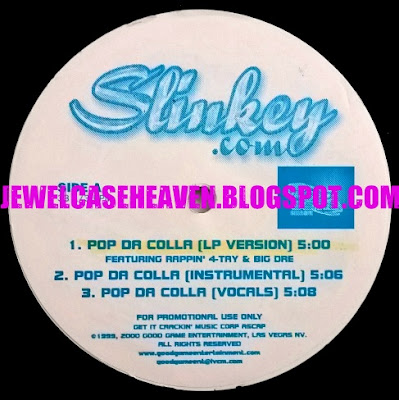 Further music from Las Vegas-based artist Slinkey (real name Manuel Alfonso Blake) who in 2004 was sentenced to death for the execution-style slayings of two strippers in the Nevada desert. While his brand of gangsta R&B paints the picture of a man very much obsessed with dough,  it showed a lot of potential with features from Big Dre, Rappin' 4-Tay and others. Often mistaken for a rapper, the songs above are a mixture of early 2000s Southern-style contemporary R&B and retro sounding grooves with a Bobby Brown-esque edge. A follow up from 2002 (posted here), was the final thing he released before his sentencing.

Posted by Jewelz Smooth at 9:02 PM